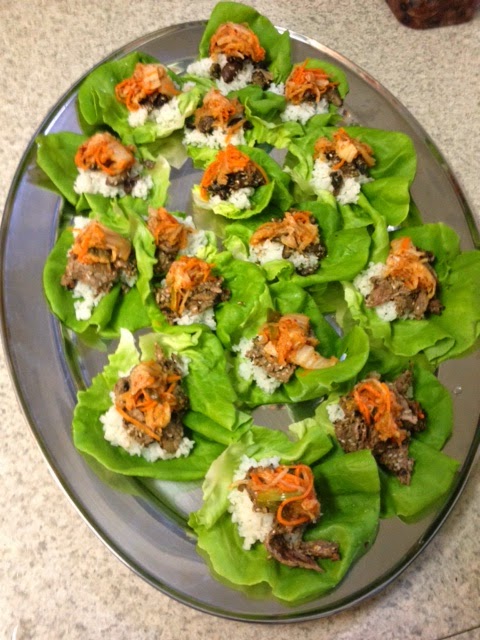 You have to understand that when it comes to interesting food ideas I tend to get a bit obsessed and throw down hours of research until I find a combination of ingredients that agrees with me. This is the result of a ten minute conversation with our friend Scarlet about Bulgogi and how her Korean friend's mom used to bring it over to their house. It seems like most people tend to make this dish into an entrée type of course but I liked the idea of doing it more like an open face salad roll. Butter lettuce worked the best to help contain the potential food-to-lap disaster, I ran out at one point and switched to leaf lettuce and it wasn’t as good. I did a basic vinegared sushi rice base on an individual butter lettuce leaf topped with the beef or mushroom mix then finished it with a generous glob of kimchi. I think that any good marbled beef will work for this dish but I really like how flank steak cooked and tasted. I sliced it on a hard bias against the grain in fairly thin strips before marinating. Chilling the meat in the freezer until just before freezing makes this really easy. For the mushroom version I used 1/3 reconstituted shitaki mushrooms and 2/3 giant white button mushrooms and gave it the same marinade as the beef. I only had time for a three hour marinade but it seemed long enough for such thin strips of beef. I did a quick sear on a hot BBQ then gave the strips a really coarse chop so they would fit on the rice base. A charcoal grill would be ideal but my propane grill gets really hot so it did the job of searing the thin beef strips very quickly which helps to keep them from drying out. I sauteed the shrooms in a smoking hot pan and finished them with sake to deglaze the pan.

Pulse all ingredients in a food processor or blender until combined. I like it to be a tad chunky so I pre-chopped the garlic, ginger and green onions a bit first. I made the kimchi a while ago as a vegan challenge and it turned out really well. I'll have to do separate post on that one since it's a fairly involved process and I'm still refining the recipe.

Posted by Alligator Pie Catering at 11:41 AM